Most Awkward Open House Ever

"Million Dollar Listing New York" might typically show real estate salesmanship at its best, but there are points when star agents Ryan Serhant, Steve Gold, and Fredrik Eklund make mistakes. And the latest episode, "Ice, Ice, Ryan," illustrates just how mortifying these mishaps can be. Consider these agents' misadventures as proof that, sometimes, there is such a thing as "too much"—too much ambition, too much creativity—when selling a home.

Never show a home until it's in perfect shape

Eklund throws a bash to sell the remaining units in a gorgeous high-rise, and while party attendees are impressed by the model unit Eklund is showing, there are a few who want to see the ultimate unit: the penthouse. The developer, Eric Bass, has been very clear that Eklund should not show the penthouse until it's finished, so it will really impress buyers and fetch top dollar.

Yet Eklund succumbs to the temptation of giving buyers a sneak peek before the penthouse is done. At first, his risky decision seems to pay off when an offer rolls in at $10 million. The problem: Bass said he wouldn't take a penny less than $12 million.

Eklund is now in extremely hot water, because he'll have to tell Bass that he showed the penthouse against his wishes. He can't just reject the offer, because "by law, an agent must submit all offers," he explains.

While Eklund tries like mad to convince Bass that he was right to show the penthouse early, Bass is absolutely livid. He says he's starting to second-guess himself for hiring Eklund in the first place, and that he's "going to have to revisit their relationship." Yikes!

Gold is selling a one-bedroom apartment that the owner believes is worth $900,000 (small potatoes by New York standards). However, Gold believes it's worth more, persuading the seller to list it at $1.25 million. Twelve showings later, however, the best offer to roll in is $1.15 million.

The owner is upset, and annoyed with Gold, because it's $100,000 lower than the list price. Gold reminds him that he originally expected to get only $900,000 for the place, and encourages negotiation. They finally sell it for $1.2 million, but it seems to have been more trouble than it was worth.

Gold says that properties with the lowest prices are "some of my most difficult and time-consuming listings.” Ain't it the truth?

Strange decor (and marketing) can spell a tough sell

Serhant is selling a townhouse that belongs to flashy Wall Street financier Alan Wilzig, who's had it on and off the market since 2014—and hired and fired a number of brokers during that time. Once he tours the place, Serhant understands why: The master bedroom doubles as a safe room, and has bulletproof glass. The bannisters are covered in crocodile leather, and there's purple mood lighting throughout.

"The house is definitely unique," says Serhant, estimating that $25 million is a fair asking price. Nonetheless, he admits that the strange decor will make this a tough sell: "I will be shocked if I find someone who walks in and says, 'I've always wanted animal horns on my bathroom door.'"

Serhant takes on an associate, Danny, to help him market the place—a decision Serhant comes to regret as soon as Serhant arrives at the open house to find that Danny has commissioned a creepy ice sculpture in the likeness of Serhant. "My Bearded King," Danny calls him.

"This is going to be really awkward," says Serhant.

As such, Serhant is not too upset when someone leans on the sculpture and it falls and shatters on the ground.

"Thank God that thing is dead," he remarks.

We doubt the Bearded King will be looking for Danny's help again any time soon. 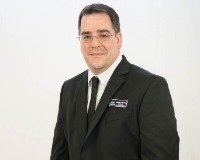 I'm a Licensed Realtor servicing the Davenport, Haines City, Kissimmee, Orlando, Poinciana, and Clermont areas. I specialize in helping investors and residential clients buy and sell their homes. I un....

The 1 Reason It Is Difficult To Find Your Dream Home

The #1 Reason It Is Difficult to Find Your Dream HomeThe headlines in real estate today all revolve around one major point: there is a shortage of homes available for sale. Price appreciation

Four Tips For Selling Your Central Florida Home In A Hurry

Four Tips for Selling Your Central Florida Home in a Hurry.One of the good things about the Kissimmee real estate market, if you are a homeowner, is thatthere is always someone looking to buy. Even

Resort Style Living in this beautiful 2 story fully furnished townhouse on the private, gated  Balmoral community on Hwy 27 close to Legoland and easy access to the

Can I Afford the House I want?One mistake young homeowners make is overextending themselves on the price of a house. They can look at what a monthly mortgage payment can be and decide that if they

Should you require assistance in navigating our website or searching for real estate, please contact our offices at 863-420-0007.

By registering, you agree to our terms of use and that real estate professionals and lenders may call/text you about your inquiry, which may involve use of automated means and prerecorded/artificial voices. You don't need to consent as a condition of buying any property, goods or services. Messages/data rates may apply.